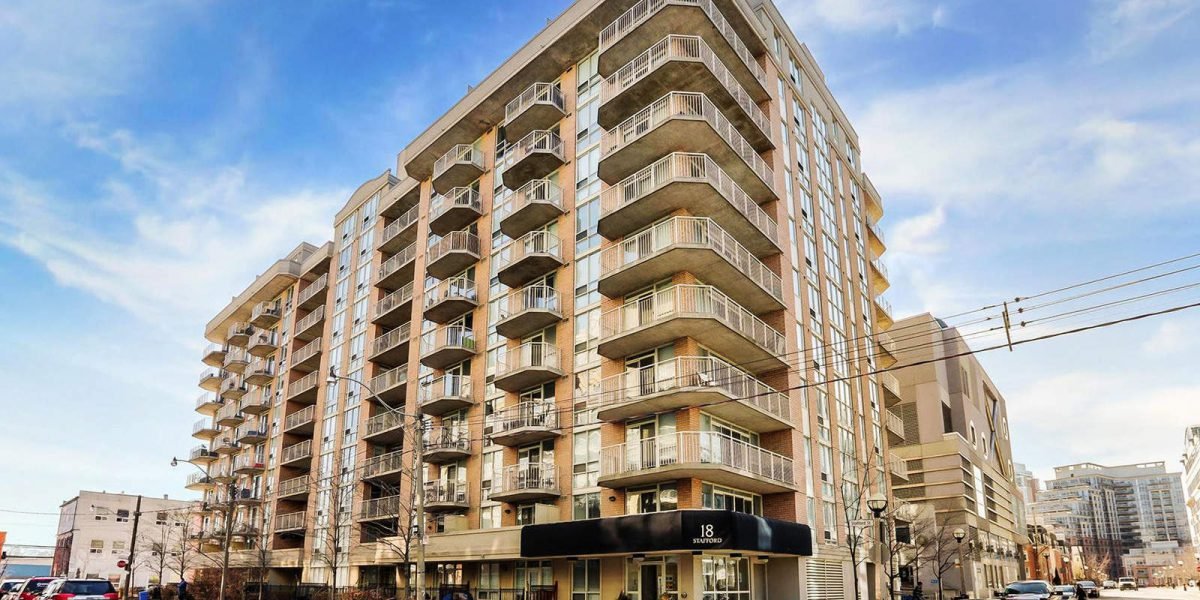 The Wellington Square Condos were built, completed and then occupied in late 2003 and early 2004 and feature an eleven floor high condominium building with a total of one hundred and seventy three (173) condo suites and units. Inside the building there exists one bedroom units, one bedroom suites with either one full bathroom or one full bathroom and a powder room, as well there are two bedroom condo units with two full bathrooms. The sizes of the suites range from just over five hundred (500) square feet to just under one thousand (1,000) square feet. The suites have finishings such as laminate floors, large windows from the floor to almost the ceiling, stainless steel appliances in some units, and open concept living, dining and kitchen areas for maximum light and best use of space. The building features amenities such as allowing barbecues on the balconies, a gym, party room, rooftop terrace and garden, and has visitor parking as well as a security system. The maintenance fees run at approximately fifty (50) cents per square foot and cover heat, water, central air conditioning, building insurance, common elements and parking. The owners and tenants are responsible for their own hydro/electricity as well as the costs of television services, internet and home phone, and owners should always obtain insurance for their belongings.

The Wellington Square Condos are located on Stafford Street just to the South of King Street West in the neighbourhood known as King West Village. King West Village lies just to the West of Toronto’s Entertainment District as well as the Financial District. The area is perfect for people who don’t wish to use their car as it is right on the King West T.T.C. streetcar line that can take you to the subway system and then to the Go Trains or VIA Rail system. There is also quick access to the Gardiner Expressway & Lakeshore Boulevard to the South which can take you East to the Don Valley Parkway/Highway 404 or to the West and Highway 27 to head North or the Queen Elizabeth Parkway (QEW) to take you to the West into Mississauga and Oakville. The closest parks in the neighbourhood include Trinity Bellwoods Park to the North as well as Massey Harris Park to the West and Stanley Park to the East. There is quick access to grocery stores and other shopping. Within a short distance is a Hasty Market, Kitchen Table, Metro, and Loblaw’s. There are also other great stores, cafes, restaurants, and bars all along King Street West and Queen Street West to the North. Malls close by include the Toronto’s Eaton Centre to the East on Yonge Street which can be accessed by the subway, or if you wish to drive there is Sherway Gardens to the West. Each mall has over 100 stores for you to do your shopping with. This is a great place to live, work and play as all your needs are met in such a short distance and it will maximize your time to enjoy your time.

We have compiled a list of the condo units and condominium suites that have sold in the past two years at the Wellington Square Condos at 18 Stafford Street in Toronto’s King West Village. If you are interested in the final price of any of these condos or condominiums please contact me by clicking here