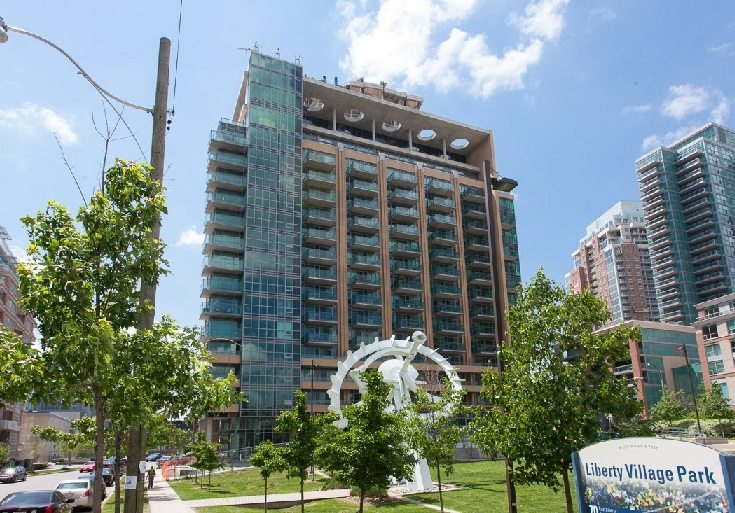 Get exclusive first access to Liberty on the Park Condos – 69 Lynn Williams Street by registering for FREE!

The condos of Liberty Village on the Park were completed in 2013 and constructed by the CanAlfa Group. The building features fifteen floors with a total of 201 total condominium suites. The building features units that have one bedroom with one bathroom and some also with a powder room as well, one bedroom plus den with one full bathroom or also some suites with a powder room, and also two bedroom with two full bathroom units. The sizes of the suites range from approximately four hundred (400) square feet and up to almost one thousand and three hundred (1,300) square feet. The condos are finished with pre-finished laminate flooring in the living areas, laminate floors or carpeting in the bedrooms, and ceramic floors in the kitchens unless the unit is in the smaller size then the kitchens are open concept areas with laminate floors as well as stainless steel appliances. The amenities in the building include a 24 hour security desk with security guard, guest suite, party room, games room and an exercise room. The maintenance fees cover the heating, water, central air conditioning maintenance, building insurance, common elements and parking if you own a space and the cost is approximately fifty one (51) cents per square foot if you have parking, while it will be a little less if you do not own a parking space. Owners are responsible for their own hydro/electricity costs.

The neighbourhood of Liberty Village in Toronto is one of the most sought after by young professionals, and professional couples in the downtown Toronto area. Quick and easy access to Toronto’s Financial District & Entertainment District which are just to the East make this a favority landing spot for people who are just moving out on their own for the first time. The neighbourhood is also great as you don’t need to have a car to get anywhere as there are many public transit options. You have the T.T.C. bus that runs directly through Liberty Village and goes North to the Bloor Subway line, or you can walk out to King Street West and take the streetcar to the East which takes you to the Yonge/University subway line and directly into the core of the city. You can also go down to the Lakeshore Blvd and catch the streetcar from there to go to Union Station and either take the subway, catch a Go Train or a VIA Rail train. For people who have to use their car the quickest routes are to head to the Lakeshore Boulevard or Gardiner Expressway to the South to head East or West to the highways that can take you North of the city. The possibilities are endless. The area also has some nice parks including the Liberty Village Park, or if you have the time on Queen Street West there is the Trinity Bellwoods Park which holds many events during the summer months and is a great place to spend the day. The shopping in the area is mostly made up of small stores which have a mix of independent and local goods with some brand name stores. There are also many boutiques that have one of a kind items that you can’t find anywhere else in the city in Liberty Village and on Queen West. The closest grocery stores include the 24 Hour Metro in the heart of Liberty Village, as well as a Price Chopper just North of the neighbourhood. The closest mall to the area is Toronto’s Eaton Centre which has well over one hundred stores of all different shapes and sizes and located on Yonge Street. For more higher end shopping you can head to Bloor Street West between Avenue Road and Yonge Street which is known as the Mink Mile and has all of the highest end shopping possible.

We have compiled a list of the condominium suites and units at Electra Lofts that have been sold or leased in the past two years. If you are interested in the final price of any of these condos or condominiums please contact me by clicking here