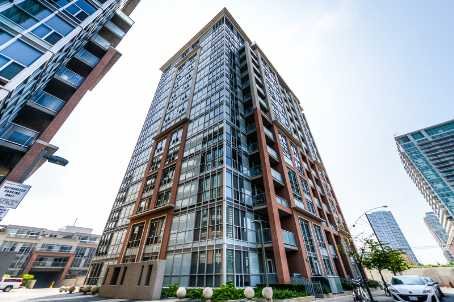 Get exclusive first access to DNA Condos – 1 Shaw Street by registering for FREE!

DNA Condos was built and completed in 2006 by Canderel Developments and features a fifteen storey condominium residence with a total of 318 condo suites and units. The building features many different types of suites including bachelor, one bedroom, one bedroom plus den, two bedroom, two bedroom plus den which some are used as three bedroom suites. The size of the suites range from over five hundred (500) square feet and up to fourteen hundred (1,400) square feet. The suites have finishings including high ceilings of usually nine feet and higher if you have a loft unit, floor to ceiling windows for maximum light, laminate or hardwood floors in the living area, some have stainless steel appliances, and one of the best features are the large balconies that allow for the use of barbecues. The condo building has few amenities including a gym/exercise room, party room, rooftop deck and garden, 24 hour security guard at a security desk, visitor parking and as mentioned the units are allowed to have barbecues. The maintenance fees are approximately fifty six (56) cents per square foot and include the heating, water, central air conditioning, common elements, building insurance and parking if your suite owns one. Tenants and owners alike will have to pay for their own electricity costs as well as television, internet, phone and insurance on their personal contents.

The neighbourhood where DNA Condos resides is known as the King West Neighbourhood as the condos lie at the corner of Shaw Street and King Street West. The neighbourhood is known for its condominium developments over the past ten years with condos lining the King West corridor now. The area sits beside the Entertainment District and the Financial District which makes it a great place to reside for people who want to live close to where they work and where they play. The condos have quick access to the public transportation system with the King West T.T.C. streetcar right at the doorstep. This can take you into the core of the city and onto the subway system. There is also quick access to the Gardiner Expressway and Lakeshore Boulevard to the South which can take you out of the city to the East, West or North. The condos are also very close to the Trinity Bellwoods Park to the East which is one of the best and well known parks in all of Toronto. The park is a large open space in Toronto’s downtown core and is a great place to relax during the summer days. The neighbourhood also has great shopping and retail close by. Grocery stores close by include the 24 Hour Metro, Price Chopper, Kitchen Table and Hasty Market, as well as other local and independent grocery stores. There is a Shopper’s Drug Mart to the East on King Street West, as well as many boutique retail stores on Queen Street West. To the East is the closest mall which is Toronto’s Eaton Centre and is best accessed via the public transit system, if you wish to use your car the next closest mall is Sherway Gardens to the West. This is one of the best places if you wish to work, play and live all in one spot.

We have compiled a list of the last two years of sales and sold suites at the DNA Condos located at 1 Shaw Street in Toronto’s King West corridor. If you are interested in the final price of any of these condos or condominiums please contact me by clicking here