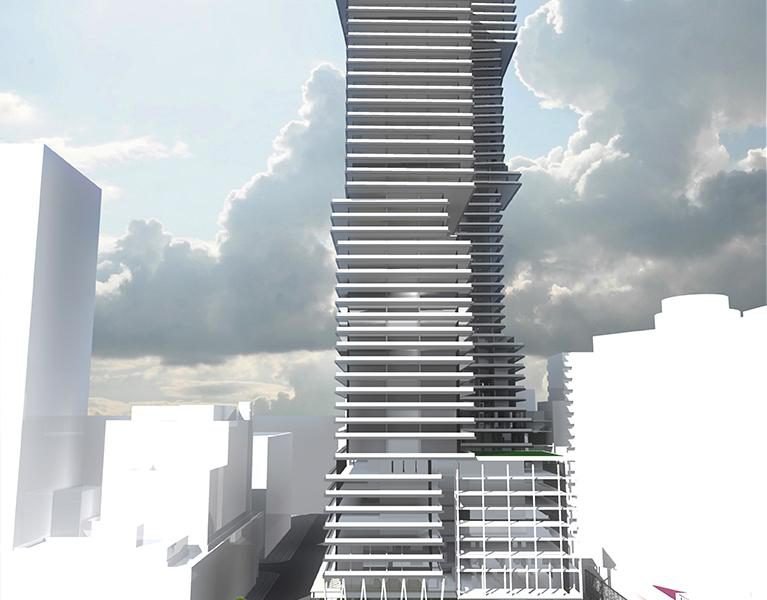 The condos to be built at 400 Front Street West in Toronto will be developed by State Building Group (also known as Forest Hill Homes) in conjunction with Stanford Homes. The 400 Front Street West Condos will be a development of four separate buildings ranging in size with heights of 24, 25, 58 and 60 floors individually. The types of units available will be bachelor suites, one bedroom, one bedroom plus den, two bedrooms, two bedrooms plus den and three bedrooms. The sizes of the units will start at just over three hundred square feet and with no unit being larger than one thousand square feet. There will be a total of two thousand two hundred and ninety one condos to be built at the 400 Front Street West location.

The 400 Front Street West Condos will be located at the corner of Spadina Avenue and will be close to all major amenities including hospitals, parks, retail shops, indoor malls, grocery stores, major highways and public transportation routes. The major medical needs of the residents will be serviced by Toronto West Hospital on Bathurst Street to the north, as well as Sick Kids Hospital, Mount Sinai Hospital and Princess Margaret Hospital all to the north on University Avenue. The closest parks will include smaller parks like Clarence Square at your door step and larger parks like Roundhouse Park and Canoe Landing to the south. The closest indoor mall is Toronto’s Eaton Centre to the east best access by public transit, with Sherway Gardnes to the west being accessed by vehicle. The grocery stores which you will have quick access to include Rabba Fine Foods and Sobey’s within a very short walk as well as many other independent grocers in the area. The major highways to service the residents will be the Gardiner Experssway to the south which can take you west to the Queen Elizabeth Parkway (Q.E.W.) and Highway 427 or east to the Don Valley Parkway. The public transportation options will include the Spadina T.T.C. streetcar at your door step which can take you north to the Spadina Subway Station or south to Union Subway Station, or you can take a short walk north to catch the King T.T.C. streetcar which can take you east to St Andrew Subway Station. Click on the map to view the full walkscore on the 400 Front Street Condos at 400 Front Street West in Toronto.

have researched and listed the Public Schools & Catholic Schools associated with the 400 Front Street West Condos in Toronto, as well as listing the closest Private Schools & Montessori Schools to the condos to be built at 400 Front Street West. Click the school name for the school website, click the boundary link for the school boundaries and click the ranking for the Fraser Institute School Ranking and EQAO Scores.