This year the street looks a little different; the media center at King and Peter now lies in the shadow of the nearly completed King Blue condos building at 355 King St W.  The forty-three story condominium  tower looms over the street, and this is just the beginning for what the future has in-store for King St, the noblest street in the downtown core. 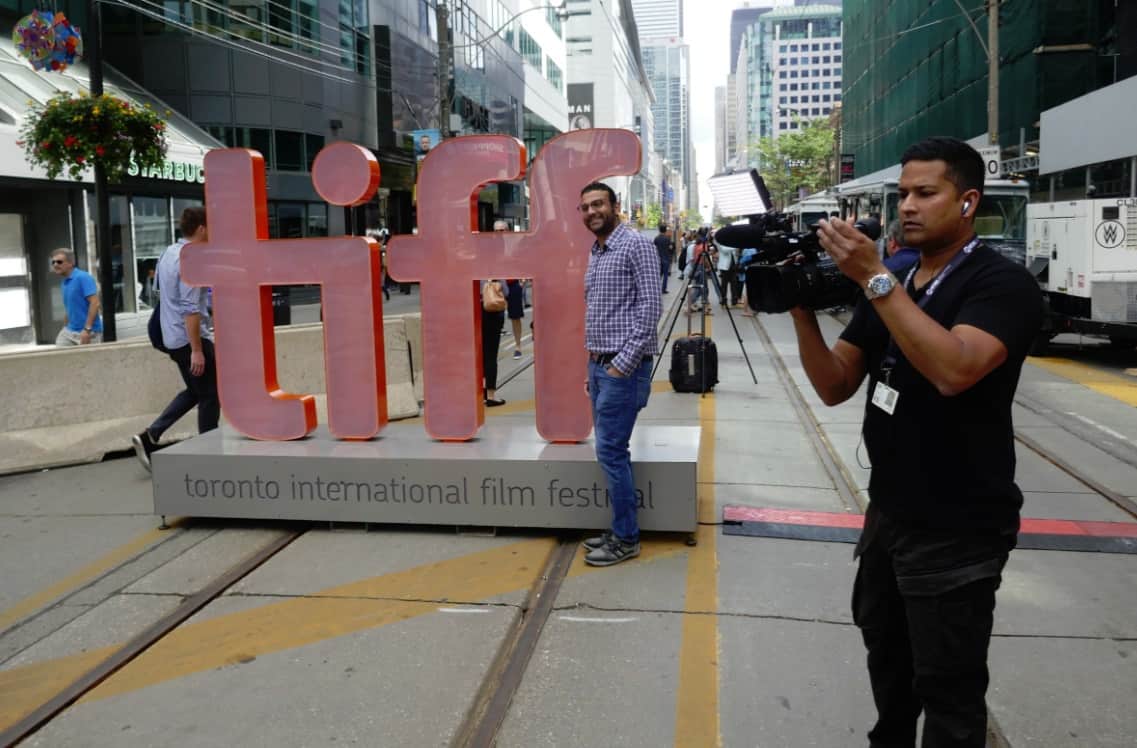 In partnership with the City of Toronto, TIFF once again hosted their Festival Street initiative on King Street West, and New Condo Centre photographers were there to capture the excitement on Opening Morning, Thursday 07 September 2018.

At the beginning and end of the walk, TIFF volunteers will gladly take pedestrian’s phones and make lovely selfies that are picture-perfect sharable moments for their social media channels.

Months ago, the city announced that once again King Street West between Spadina and University avenues will be closed from 5 a.m. Thursday Sept 7th, to 5 am on Monday September 10th.  All the shops and especially the restaurants on the street offered specials to draw in celebrities and movie lovers from across the city and province. 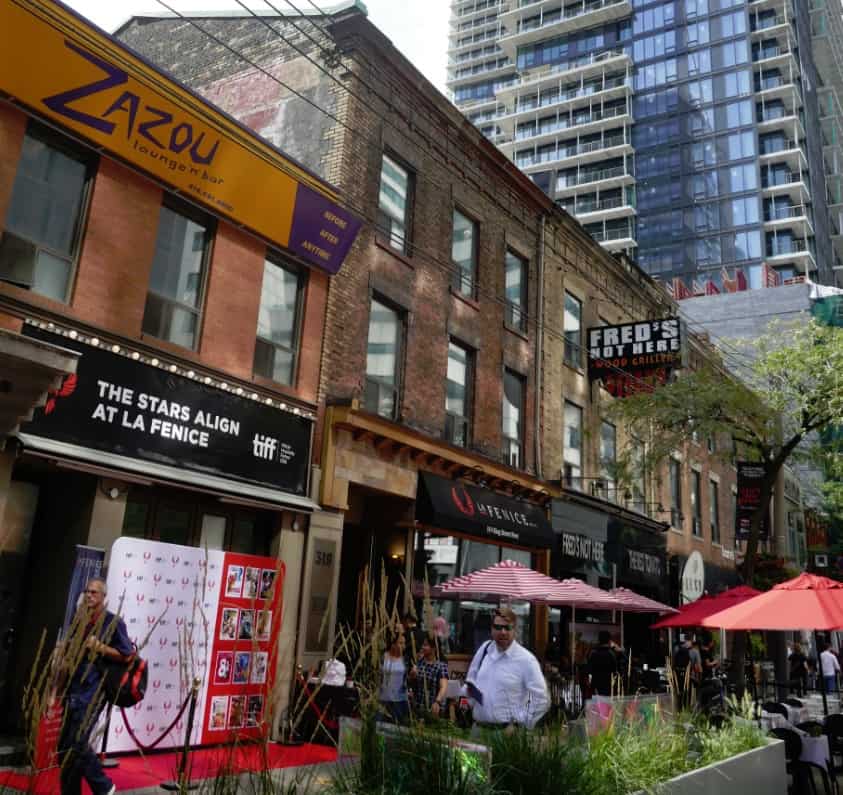 In a press release sent out by the city, Coun. Michael Thompson (Ward 37 Scarborough Centre) shared the City’s growing appreciation for King street when he penned that, “As the leading public film festival in the world, TIFF has helped establish Toronto as an international film capital while Festival Street now attracts more than 150,000 annual visitors, resulting in a significant increase in visitor spending in the Entertainment District.”

Condominium projects on Wellington Street to the south of King, and more towers on Richmond and Adelaide to the north of King confirm these streets have bright futures too. 543 Richmond Street is a very exciting project nestled between the conflicting cultures of King and Queen Stree and sales in this project will definitely be affected by its proximity to this pedestrian friendly Festival setting. 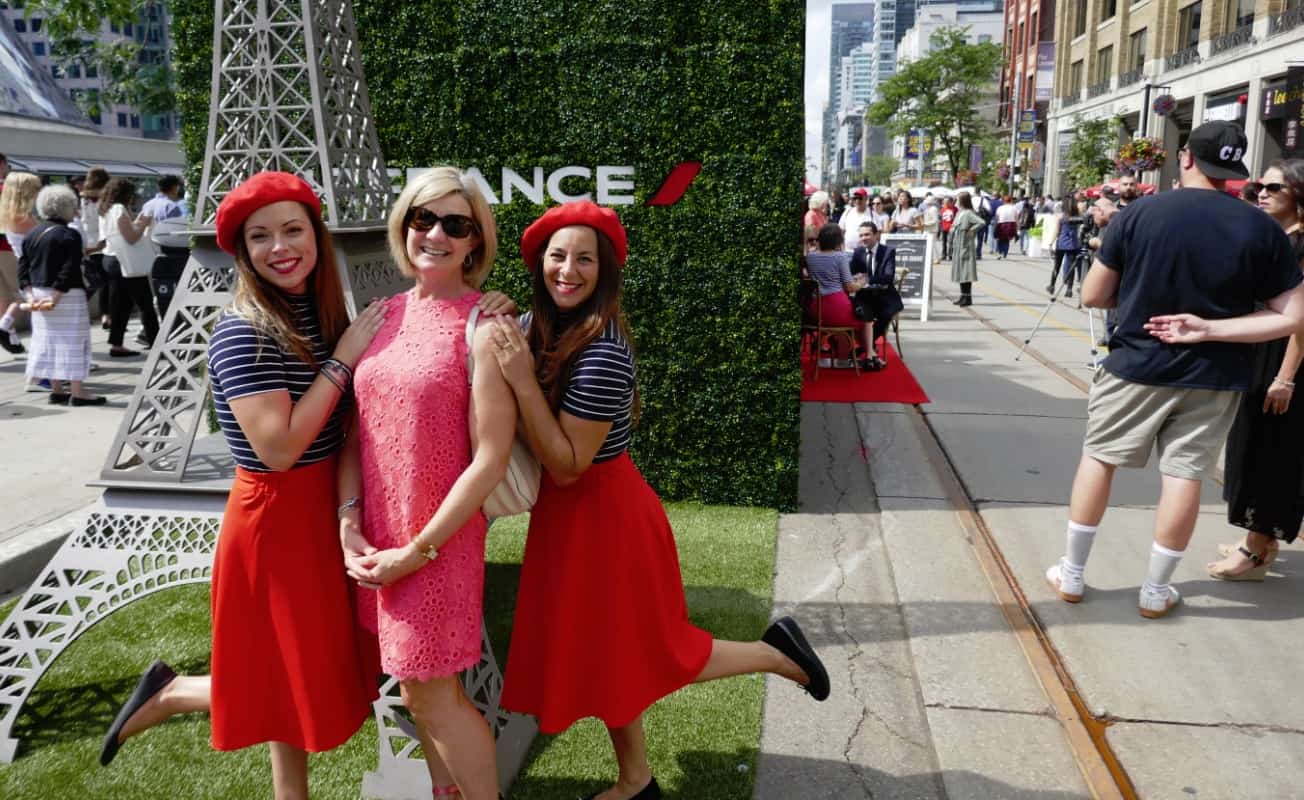 Visitors are also welcome to grab a drink at one of the extended patios, and there’s plenty of free things to line-up for all along the promenade. Below is a solid installation opposite Roy Thompson Hall in which Lorielle was giving away lipstick. The attraction also asked for each participant’s name and email address in connection with a prize giveaway of free TIFF movie tickets.  In this manner, the marketing attraction collected the contact information for thousands of would-be consumers living and working in the downtown core. 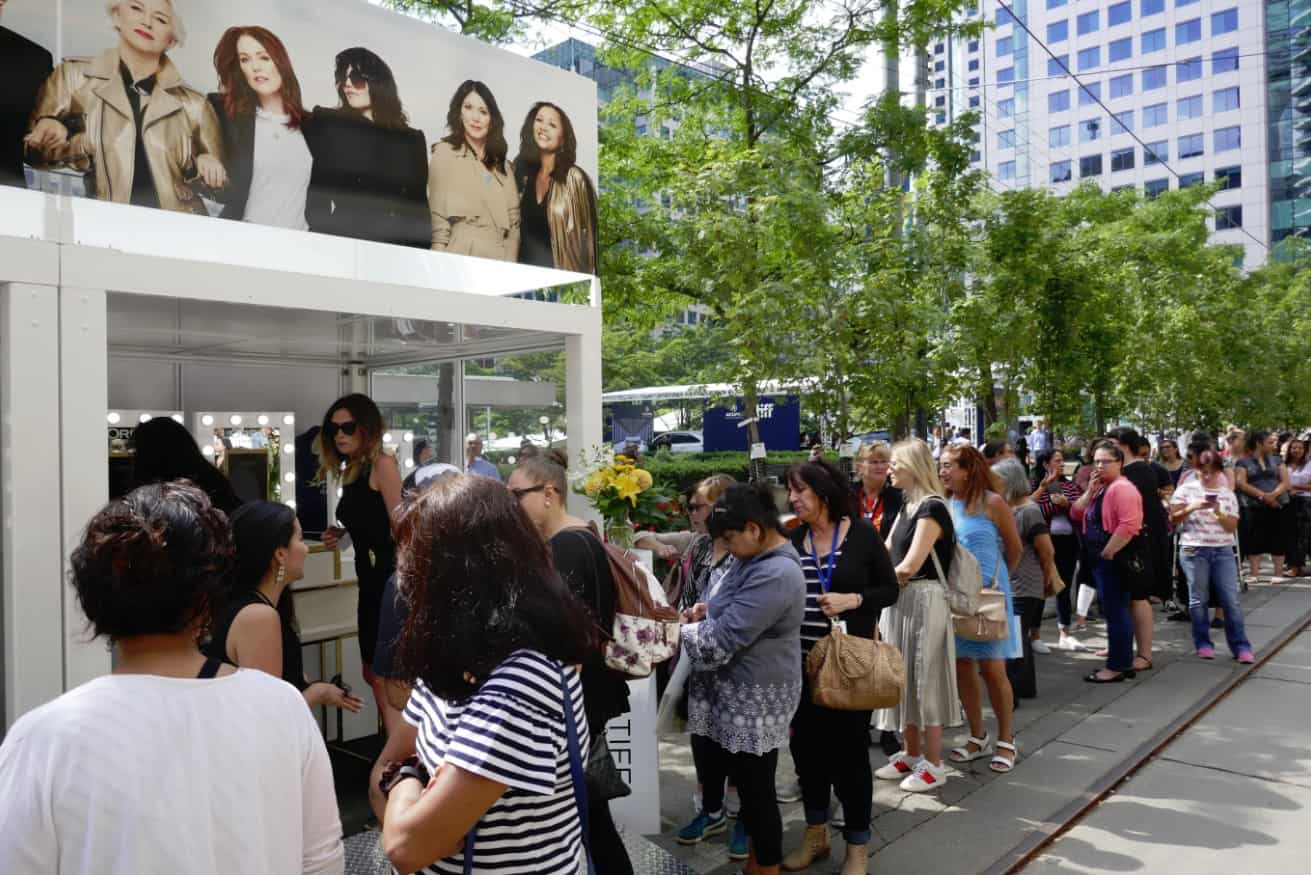 There were also gourmet food trucks, and food giveaways at Simcoe St and University Ave.  Sabra Dipping Company LLC had people lining up down Simcoe Street to taste their Middle Eastern-style and other food products, including hummus, tzatziki dip, guacamole, and Mediterranean salsa. 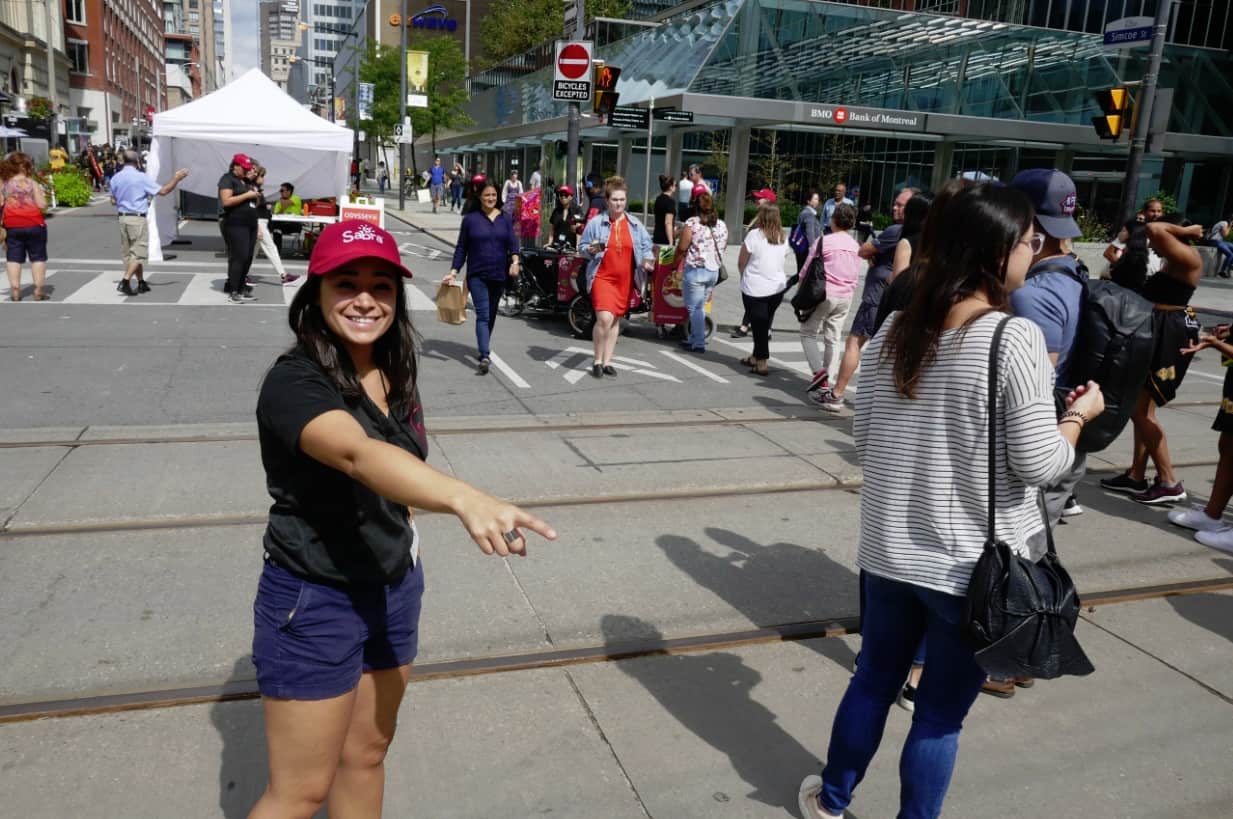 TIFF is a popular film screening festival that engages more than 450,000 film lovers annually.Festival Street saw 150,000 visitors over its four day span, and was a driving force behind increased revenue for many local bars and restaurants.  This is a great way to cement the success of the King Street Pedestrian Pilot Project which is a new initiative to close the road to private automobiles.

Now the TTC had to close the thoroughfare to streetcars too, and the road closure affects streetcar service on the 504 King, 514 Cherry and 304 King night services. During the five-day festivities, Simcoe and John streets between King and Wellington streets will be closed as well. 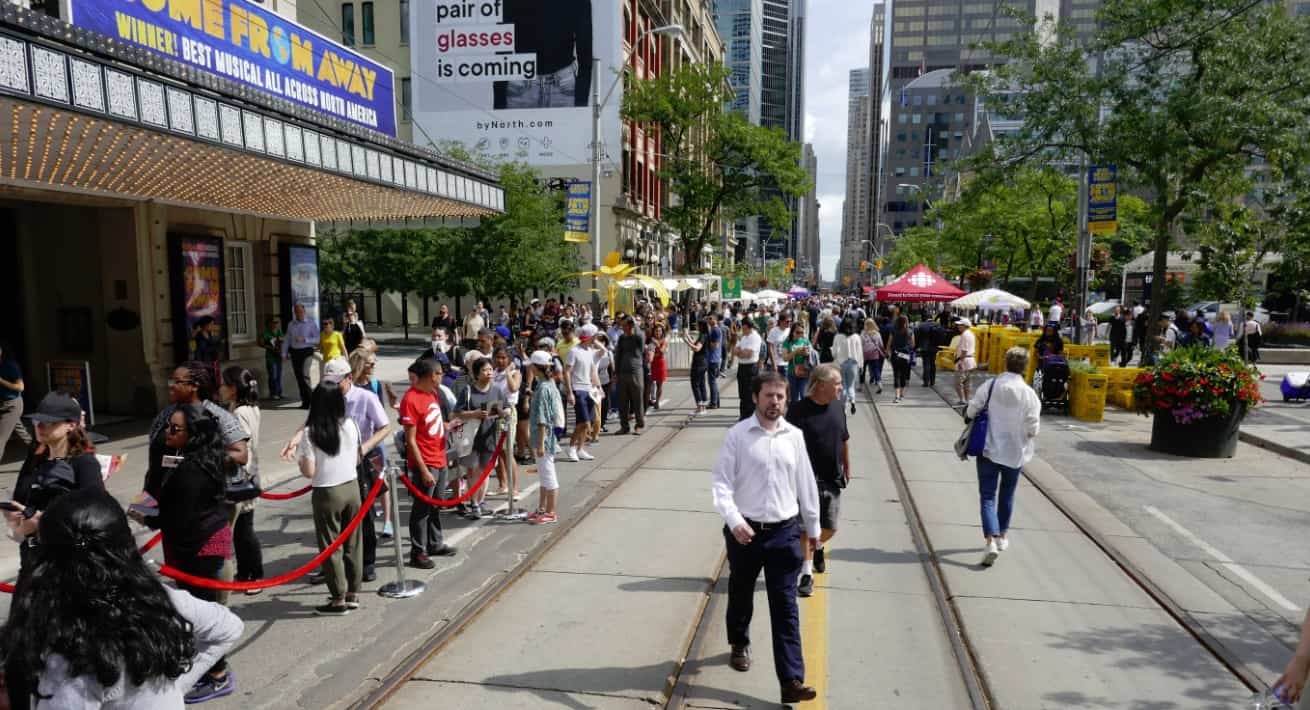 But the TTC is actually a proud supporter of 2018 TIFF

Through their partnership, TIFF and the TTC help film loving riders get access to free TIFF movie tickets.  Street teams are set to distribute free Festival and TIFF Bell Lightbox tickets, culminating in a special TTC Free Screening at Roy Thomson Hall on Sunday September 9th 2018. The Festival event was open to all TTC riders; anyone with a valid Metropass or PRESTO card could get free entry into the spacious Roy Thompson Hall main screening room. 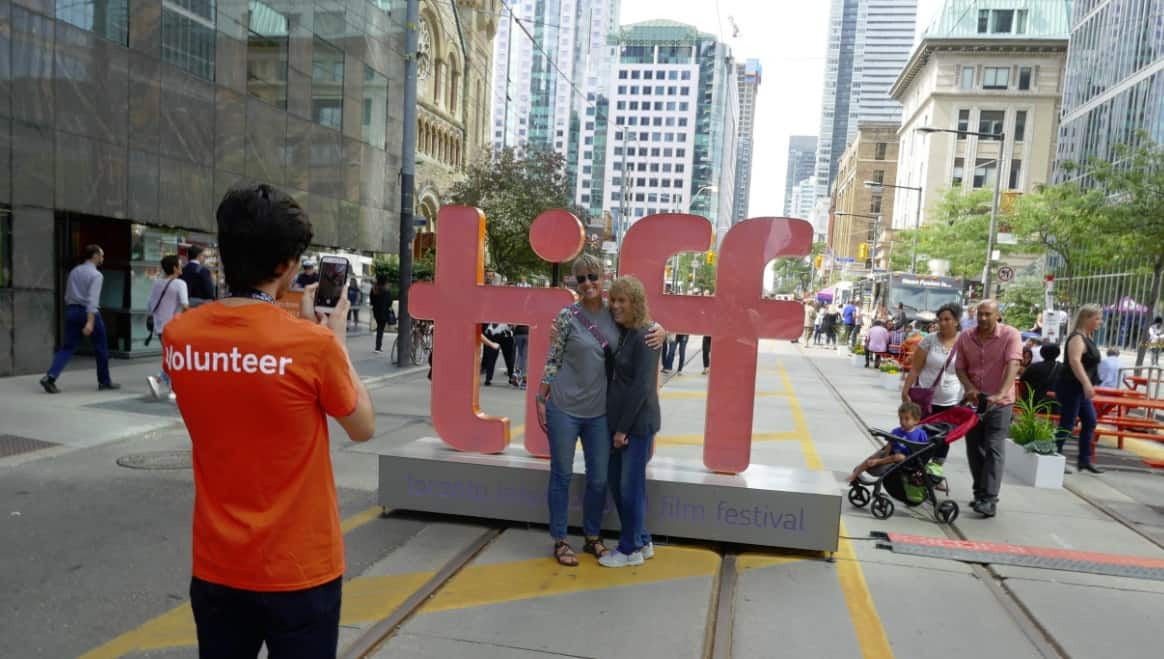 There’s something for everyone on Festival Street.  Attendees can see vintage TIFF movies playing at screens along the way, or they can also listen to great music from Kayla Diamond and other up-and-coming talents on the Slaight Music Stage.  This is just the beginning for TIFF, Toronto and King Street.