If you’re reading this in Toronto, then you’re living through (or have just lived through) the largest expansion of the TTC’s transit network since the 1960s. The Crosstown LRT is a light rail train line that runs nearly twenty kilometers across Eglinton Avenue between Mount Dennis (Weston Road) and Kennedy station. The line has twenty-five separate stations, ten of which are underground. The Crosstown LRT will link to fifty-four bus routes, three subway stations and various GO Transit lines. This train line will transform Toronto and give oxygen to new condominium developments that, as they mature, will come to define new neighbourhoods.

The Crosstown is being presented as a highly efficient transit solution that avoids congestion by carrying passengers in a separate train line right-of-way transit lanes separate from regular traffic. It will transform Toronto and now suddenly we have a transit map that more resembles a major world capital.  The vehicles will use the PRESTO proof-of-payment system and will have multiple entrances and low floors to ensure fast and accessible boarding.

Anytime there’s a new train station there’s a burst of development near the scene. This has been the case with every rail expansion since the dawn of the Age of Steam.  What makes the Eglinton LRT so special, and indeed a little overwhelming, is that there are twenty-five new stations and each new stop represents significant real estate opportunities.

What are the Eglinton LRT Line Stations?

What Canadian Artists Were Commissioned for Eglinton LRT?

The Government of Ontario has committed $8.4 billion in support of new transit for Toronto and some of the money will be spent on art. The artworks selected for the Eglinton Crosstown are world-class, contemporary, impactful, and context-appropriate enhancements to public space and civic infrastructure. The selected artists contributing designs to the Crosstown project include Janice Kerbel, Douglas Coupland, Rodney LaTourelle with Louise Witthoft, Hadley + Maxwell with Sara Cwynar, Sarah Morris, Joseph Kosuth with Dagmara Genda. Integrated art components will be installed at six stations: Mount Dennis, Caledonia, Cedarvale, Eglinton, Science Centre and Kennedy station.  These projects are part of a professionally designed public art program that will place Metrolinx on par with leading transit agencies and help improve Toronto transit riders’ experience.

Light rail vehicles can travel as fast as 80km/hr, but that doesn’t mean the trains will travel that fast on the Eglinton line. Their actual speed on the new tracks will be determined by the spacing of the stops and the speed limits of surrounding traffic. It will be a bit of a signalling challenge to be sure as the trains travel beside the roadway but they still cross over two dozen major north south arteries.

The projected ridership of the Crosstown is 5,500 passengers per hour in Rush Times by 2031. The capacity of the Crosstown vehicles is 15,000 passengers per hour in either direction. Cars can be removed or added easily, thus providing the flexibility to accommodate ridership demands. Light rail transit is a proven technology that is used around the world, including extremely cold places such as Edmonton, Calgary and Minneapolis.

There are scattered jewels of investment all along the Eglinton LRT line, but New Condo Centre is particularly interested in Wynford Gardens Condos, a new condo development by Allied-Hotel-Properties-Inc located at 175 Wynford Dr, Toronto. 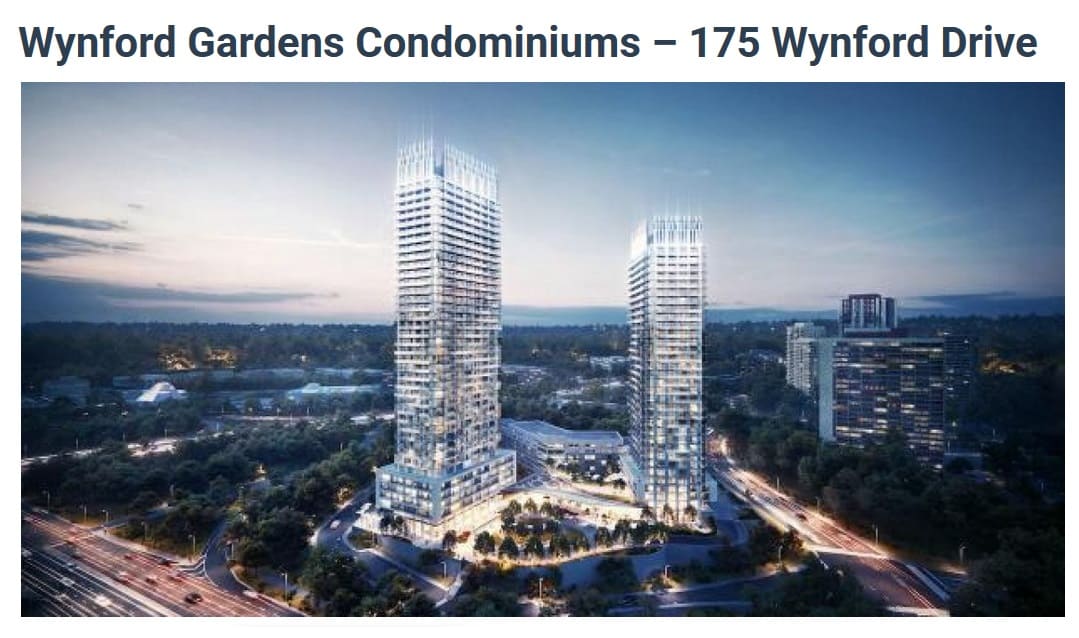 The name of the project is Wynford Gardens, and its being developed on the North East Corner of Don Mills Road & Eglinton Avenue.  This is one of the first major developments along the new rail line. Due to the heavy investment of the government on the LRT network, most major corners along the LRT line are being redeveloped in the process. The Don Mills & Eglinton intersection site includes a 34-storey condominium building, along with a six-storey hotel and a six-storey seniors’ residence.

Wynford Gardens is a huge project all by itself.  The new towers at 175 Wynford Avenue, according to plans submitted by Quadrangle Architects, would add 755 residential units to the site, along with renovations and reconfiguration to some of the existing structures. The 39-storey tower would add 431 suites to the site, and the 32-storey tower will add 324 units. Parking is being created in a four level underground garage which has 766 spaces for residents and visitors. 578 bicycle parking spaces would also be available for resident use. The main floors of the new towers would contain a multi-level restaurant, bar, and lounges, along with daycare facilities and outdoor children’s play area. 1,442m² of indoor residential amenity space would be provided in each tower on both the 3rd and 4th floors.

Phase One condominiums will be followed by a general transformation of the suurounding property into a mixed-use development, featuring condominium and town home residences, along with significant office and retail areas, community facilities, and municipal infrastructure. This will further increase the values of Wynford Gardens residences. 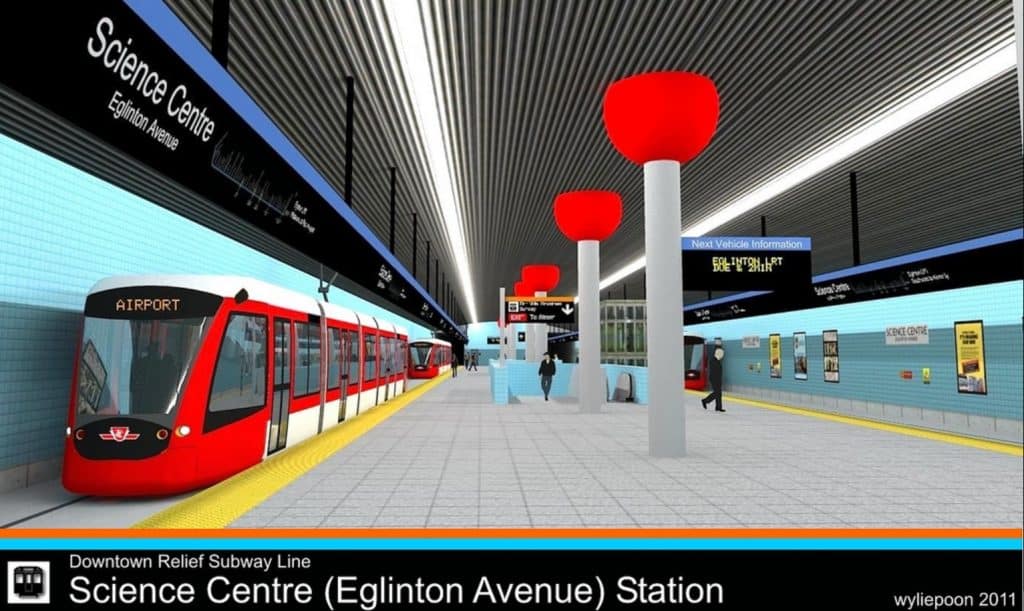 Aga Khan Museum is the TTC station on stop east of Wynford and here lies a World Class museum of Islamic art, Iranian (Persian) art and Muslim culture. This is a fixture in the North York Muslim communities and all across Toronto, Ontario, Canada. The museum is an initiative of the Aga Khan Trust for Culture, an agency of the Aga Khan Development Network. It houses collections of Islamic art and heritage, including artifacts from the private collections of His Highness the Aga Khan, the Institute of Ismaili Studies in London, and Prince and Princess Sadruddin Aga Khan, which showcase the artistic, intellectual and scientific contributions of Muslim civilizations.

The History of the Aga Khan Museum

In 1996, the Aga Khan bought the property at 77 Wynford Drive from Shell Corporation. In 2002, he bought the adjacent property, which was formerly the Bata Shoes Head Office. On October 8, 2002, the Aga Khan Development Network (AKDN) announced the establishment of the Aga Khan Museum, Ismaili Centre and Park on the site.  The foundation-laying ceremony for the project was attended by Canadian Prime Minister Stephen Harper on May 28, 2010.

The Crosstown is currently under construction and will be complete by 2021. The project started back on November 28, 2012, when Metrolinx, and the City of Toronto and TTC signed a master agreement for the implementation of the Toronto Light Rail Transit Program. The agreement formalized the construction and future operation of the four new Light Rail Transit (LRT) lines in Toronto, which will improve public transit and ease congestion in Toronto. Metrolinx will own the LRT lines, and the TTC will operate them.